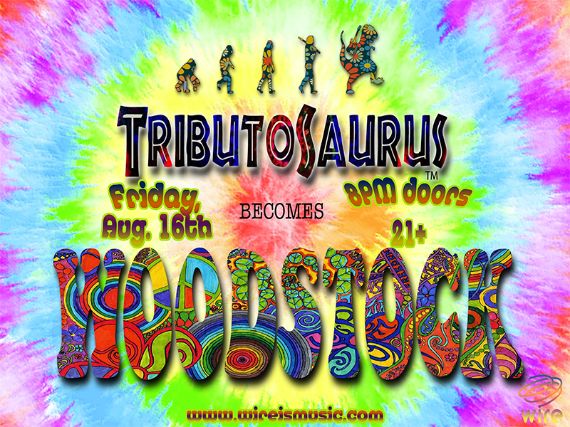 It is the archetypal music festival. Safe to say that every enormous musical gathering since, when multiple bands hope to attract tens of thousands of people, is forever compared to “An Aquarian Exposition; 3 Days of Peace & Music.” It has amazingly been 50 years since Woodstock.
For many of us, Woodstock remains the stuff of mystical, transcendent cultural legend. If you were alive when it happened, you should have been there. The organizers expected 50,000 people, and instead got 400,000. If you were conceived too late, perhaps you wished you’d been born earlier to feel the power of that musical moment. The least we in Tributosaurus can do is pay proper homage to the festival, with as much of the music as possible
Join us on the 50th anniversary of the Festival’s opening days, Thursday July 15th at Martyrs and Friday July 16th at Wire, when Tributosaurus attempts to become Woodstock.
How do we become an entire Festival? Many many bands will be musically recreated for you, some of which we’ve become before (The Who, Jimi Hendrix, Santana, The Band, CSNY & more), and some of which we have never become. We’ll leave those as a surprise, though we will probably skip Sha Na Na. The night’s set list will ONLY contain songs that were actually played there on Max Yasgur’s farm, and you know we’ll make sure to be as instrumentally accurate as humanly possible. On stage announcements familiar to most from the soundtrack album and movie will be delivered. And as always, the music is the star, with Tributosaurus but a vessel to share it with you.
Joni Mitchell wrote a song about Woodstock, because she wasn’t there. Charles Schulz named Snoopy’s bird pal after it. The concert movie changed many of our lives. This festival must be honored properly.
Join Tributosaurus us on August 15th and 16th, for 2 days of Peace & Music.

Doors open at 8:00 PM. Show starts at 9:00 PM. EXTREMELY limited venue seating is available on a first come, first served basis unless otherwise noted.  Parking on the street with no permit restrictions or meters. We do not serve food but you are welcome to bring in take-out or snacks. However, the venue reserves the right to determine table and floor orientation. Additionally, the only way to secure a seat is to purchase a VIP reserved balcony ticket which are subject to limitations. Questions or concerns can be directed to [email protected]